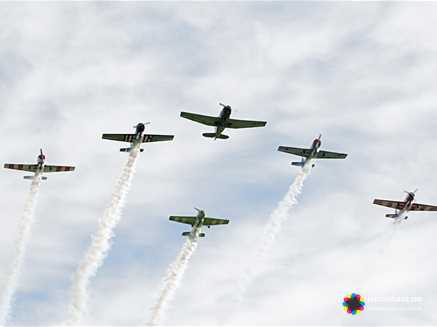 Annual aviation festival - a summer cultural, patriotic event, aimed at raising patriotism among the younger generation and popularization of aviation. W e are demonstrating our viewers the history of aviation - from wartime aircraft to modern aircraft in service with the Army facing our country today.

The celebration will be attended by representatives and different federal districts of Russia, more than four hundred and fifty participants, about 100 aircraft over 70 parachutists. To participate in the festival will be attracted masters of airplane, helicopter and parachute sport - champions of Russia, Europe, the World. Demonstration performances of aircraft and helicopters of the Armed Forces of Russia, single and group aerobatics of civil aviation and general aviation, performances of rare aviation equipment of different years, balloons, parachute jumps and dome acrobatics, motor paraplanes, trikes, model aircraft and kite flying.    Also in the program:   Ground exhibition of military and civil aviation equipment of different years. Exhibition of automotive equipment of the Great Patriotic War. Exhibitions of retro cars of different years, techniques of bike-clubs. Outdoor kitchen, a variety of children's attractions, recreational activities, workshops, raffles from the organizers and festival partners as well as a fair of souvenirs and summer cafes.

Admission is free. No age restrictions. The beginning at 9-00