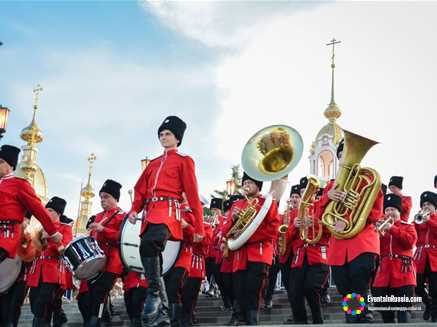 The names of two composers – Vasily Agapkin and Ilya Shatrov – are not mentioned in the name of the festival for nothing. The lives and careers of both musicians had been linked with Tambov region.

On the festival days Tambov streets are filled with the sounds of various tunes and marches, sounds of military bands marching and spectators admiring them.

The festival takes two days. On day one, participants traditionally perform in different towns and districts of the region, then the musical holiday moves to Tambov where a spectacular march parade takes place. The streets are filled with music played literally everywhere. The regional center becomes a huge stage, and all citizens and guests of the town – the audience.

After, the columns of musicians meet in Music Square where a big gala concert including exhibition performances with weapons are held. One by one, the brass bands show not only their musical mastery, but also the ability to juggle with drum sticks and dance. Traditionally, holiday fireworks follow the concert of brass music.