A Theatrical Festive Activity «The Battle of the Vozha» 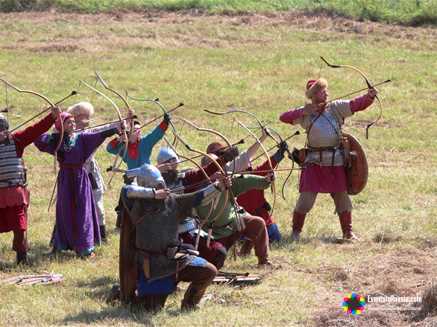 This great theatrical festive activity is devoted to the famous battle on the Vozha that took place in August of 1378 and was a kind of “rehearsal” for the Battle of Kulikovo. The celebration is built around the theatrical action based on the events of that famous battle.

The spectators can visit a historical photostudio, compete in archery and javelin throw, and take part in the historical quizzes. It would be an interesting experience to visit a medieval feast, taste the antique cuisine, and memorize some medieval recipes. “Maloe Ristalische” (“Minor Battle”) and “Ratnye Potekhi” (“Army Fun”) attractions will involve you into the improvised costumed role play named “Soobscha I Vraga Bit’ Legche” (“It is easier to Fight the Enemy Together”).