The Celebration of St Nicholas the Miracle Worker Day 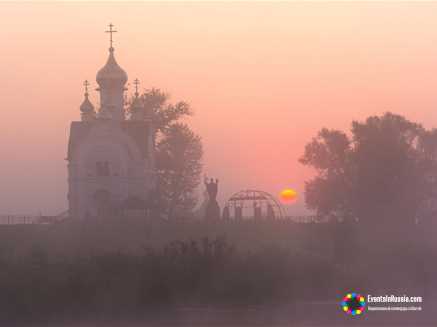 On this day, thousands of pilgrims from all over Russia and abroad get together on the bank of the Svyatoye Lake to say a prayer and walk in a procession.

The Mamontov monastery, founded in the early 17th century and revived in these days, is one of the most renown and visited places in the Tambov region.

The legend has it that, at the beginning of the 17th century, monk Mamont discovered the miraculous icon of St. Nicholas of Mozhaisk at the bank of the Glubokoye lake (the original name of the Svyatoye Lake). Later, in 1629, the old monk founded a monastery that by the middle of the 17th century became one of the richest ones in Tambov.

The miracle-working icon of St. Nicholas in the gilded silver icon plating had been stored at the altar of the first wooden church in the monastery. As years and centuries passed by, the monastery had to survive at different times like persecutions under Catherine’s reforms and construction of new churches. The 20th century and the revolution brought drastic changes. The wooden St. Nicholas church was destroyed in 1925. The clergy and nuns were arrested and sentenced to various terms of imprisonment.