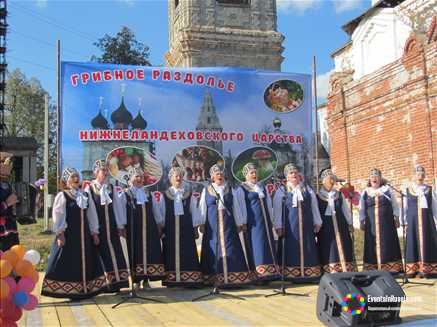 The Royal Mushroom holiday has been held in the village of Nizhny Landekh in the Ivanovo Region since 2017. The name of the holiday "The Royal Mushroom" was not chosen by chance. Pestiakov places have always been famous for their porcini mushrooms. Alexander Serafimovich Gaysky, a writer from Nizhny Novgorod, pointed this out in the 19th century. In addition, the decoration of the mushroom near the village of Nizhny Landekh was also famous - its secret was that each mushroom was dried separately on the lights. Then the mushrooms were sent by whole wagons to bazaars and fairs in Moscow and Nizhny Novgorod, and were also sold in the shops of the Dubinins brothers in Pyatigorsk.

The Royal Mushroom festive event was organized as part of the Pestiaki – Nizhny Landekh – Pestiaki motor rally and is dedicated to the memory of the natives of the Nizhny Landekh village, the world's first oil refiners to the Dubinins brothers.

Hundreds of people gather in the center of the village of Nizhny Landekh - guests from neighboring districts and regions attend the event. The organizers are preparing a big fair, gastronomic workshops, a concert program, as well as a mushroom quest.

The holiday presents a variety of dishes - mushroom pizza, patties with mushrooms, pie, pancakes, caviar, mushroom soup, various salads using mushrooms, pickles and much more. Anyone can try and enjoy this mushroom flavor.