The Historical Reenactment Festival of Medieval Culture “The Iron Town” 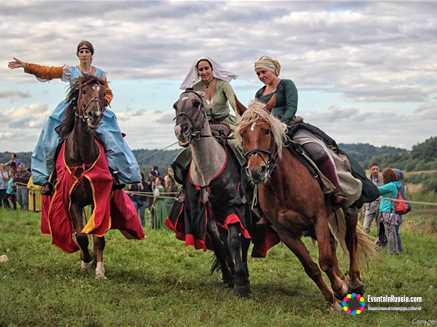 The Historical Reenactment Festival of Medieval Culture “The Iron Town” recreates the events of the 13th – 17th centuries that were taking place in Rus and Europe, enables people to immerse into the epoch, to get acquainted with the culture, traditions, customs, life and heroic deeds of medieval warriors. The main festival ground is located on the plateau above Gorodischenskoye Lake. The programme of the Festival is diverse and interesting. It includes the festive opening of the Festival, the participants' walking in a procession and lining up in front of the audience, a parade and introduction of the historical reenactment clubs, a demonstration of the historical costumes, a battle in accordance with the rules of manoeuvres, a tournament, a competition in archery, equestrian contests. The most spectacular event of the festival is a reenactment of a big battle with warriors wearing real armor.

The reconstruction of an episode from a battle “The 17th century in the history of Izborsk” is especially favourite with people. The participants of the Festival demonstrate how to use a musket, a spear and artillery weapons. All the events are commented by professional historians who explain to the spectators the rules, the course of the battle and the maneuvers of the participants.

During the Festival the visitors get acquainted with the everyday life of our ancestors in a historical military camp, located on the plateau above Gorodischenskoye Lake. The life or historical reenactors in a military camp, not depending on the epoch represented, completely reconstructs the historical situation.

In the framework of the Festival a playground for children welcomes its guests, where the little visitors can put on armour and fight with soft swards; a medieval trade fair and a tavern are open for visitors, master classes and lessons are organized.

Traditionally a folk group from Kharkov “Spiritual Seasons” gives a performance of medieval music by the walls of Izborsk Fortress.