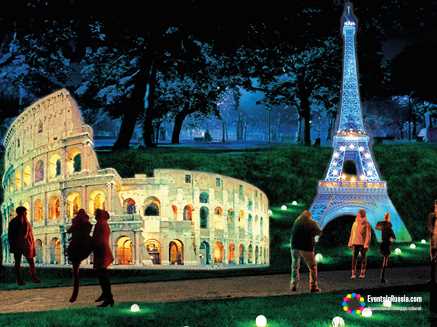 “Lantern Festival” is a unique show based on ancient traditions and modern technologies that conquered the world!

The event itself is an exposition of constructions in the form of huge luminous art objects (lanterns).

The Lantern Festival is an amazing journey into the world of a fairy tale, where amazing animals, birds, plants and many other images await you at the junction of reality and fantasy.

Since 2005, the festival has been to more than 50 countries. The exhibition of giant Chinese lanterns has been observed by residents of the United States and Canada, Lithuania, Holland, Italy, Estonia, Belarus, Germany, Spain, the UK and many other countries.

For the first time, the Lantern Festival in Kaliningrad was organized by our company in April-June 2019 and was dedicated to China. The Giant Chinese Lantern Festival show was created by the Haitian Culture Company from China and based on ancient traditions and modern technology. Each light figure is the result of the work of dozens of masters and a mini-masterpiece. All objects are incredibly detailed, and their scale is striking in its grandeur.

The festival was held on Kant’s island and was very popular. During the Festival, more than 40 thousand people visited it. An event of this format is innovative in the field of cultural events held in Russia in general and the Kaliningrad region in particular. The festival is in demand in many countries of the world and attracts the attention of residents and tourists of all age categories and social groups.

In 2020, we plan to go beyond the traditions of China and make the Festival international.

From December 2020 to January 2021, more than 25 large-scale lighting compositions, including more than 500 objects, will be exhibited in Kaliningrad. Each figure is the result of the work of dozens of masters and a mini-masterpiece. The sturdy steel frame is expertly covered with a multi-colored fabric and expertly illuminated from the inside, thanks to which, despite its rather large size, the exhibits seem completely weightless.