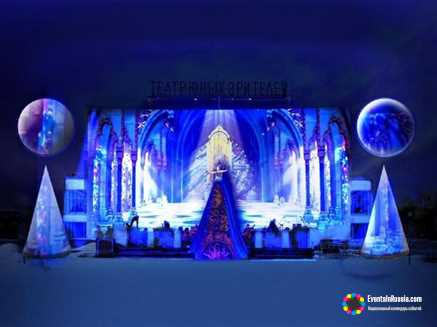 The first edition of the festival in Saint-Petersburg took place in April 2016, as a dedication to 260 years anniversary of the Alexandrinsky Theatre. With the help of 3D-mappingtechnology the facade of the city’s oldest theatre, as well as other monuments of the architectural ensemble of the Ostrovsky square, were involved in a game of light, music and optical illusions.

In November 2016 the autumn festival of light represented a series of shows on the facades of the architectural masterpieces of Saint Isaac’s square — Mariinsky Palace and Saint Isaac’s Cathedral. The main character of the shows was the magnificent Saint-Petersburg — its history, legends and images, its soul and memory. The festival was the climactic point of the celebration of the Unity day and got a historical record of 3D-mapping height: 101.5 meters. The project was seen by more than 400 thousand people.

In April 2017 the light shows were held at a new venue — Saint-Petersburg Arena — a new sports facility that will host the 2018 FIFA World Cup. No wonder that the main theme of the shows were football, its history in the world and the unique place it has in Saint-Petersburg’s life.

On 4 and 5 November 2017 festival of light took place in Petersburg for the fourth time and settled at the Palace square and Petrogradskaya embankment. The program at the Palace consisted of two volume parts: "1917" on the facade of the General staff building, dedicated to the 100th anniversary of the Russian revolution, and the contest video artists of the world "I this city stored", which unfolded on the facade of the Winter Palace.

The main party in the autumn season of the festival of light 2017 played the legendary cruiser of I rank "Aurora" volley which changed the course of world history, marking the beginning of the revolution.

On Board the cruiser demonstrated a unique multimedia show in 3D. Construction of the cruiser and battle your way, "Aurora", recognizable historical landmarks of the early twentieth century, the famous volley, the revolution, the subsequent most important events of Russia and its modern looks were presented in a fascinating three-dimensional measurement.

In the show were used the most modern technologies of mapping amazing video and audio effects, powerful lighting and pyrotechnics.