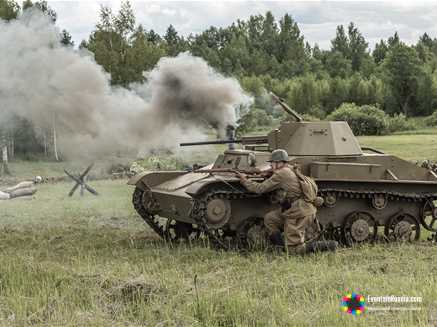 The Stalin Line is a chain of defensive fortifications along the state border of the USSR from the Karelian Isthmus to the shores of the Black Sea. It was built from 1928 to 1939. The fortification system was unofficially called the "Stalin Line", similar to the "Maginot Line", "Mannerheim Line" and others. It consisted of 23 fortified areas, including more than 4000 long-range firing points (pillboxes) . It was a powerful reinforced concrete barrier 1200 km long. Three fortified areas were located in the Sebezh, Pskov and Ostrov districts.

The festival organizers annually reconstruct events of historical importance: battles of the Red Army with superior units of the Wehrmacht in the Great Patriotic War. For spectacular reconstruction, Soviet and German military equipment is used: artillery and mortars, cars, motorcycles and armored vehicles. An exhibition of modern military equipment and weapons will also work at the festival.