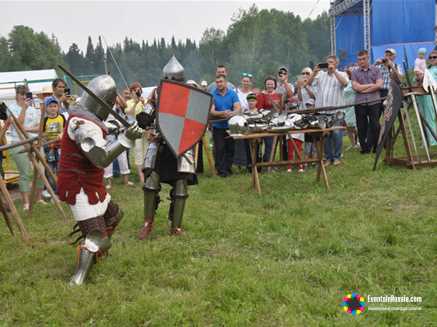 From the early Middle Ages to the times of World War II. At the end of July, in the village of Semiluzhki, Tomsk Region, an annual reconstruction festival "Semilujenskoe Field" is held annually, where guests are introduced to various historical eras. At medieval venues represented by Tomsk reconstruction clubs “Chimera” and “Bulat”, guests are shown demonstrative fights, introduced to board and outdoor games of that time, and invited to take part in an archery tournament. In the camp of service people, equipped with the VOI “Service people of Siberia - Tomsk prison”, spectators can observe the reconstruction of the military and domestic culture of the Moscow Kingdom and the peoples of Siberia of the 16th-17th centuries. For all comers, educational excursions are held, with photographing and learning the basics of Pushkar. The history of the Great Patriotic War is represented by the associations "Vio Fortress", "Search squad" Patriot "and" Guard ". Small arms of the Wehrmacht and the Red Army are exhibited at the sites, and a large-scale reconstruction “Forcing the Dnieper” is underway at the Semilujensky Pond. The innovation of 2019 was a competition among masters - artisans. The festival was attended by more than 10 masters, including blacksmiths, potters, birch bark beetles, etc. More than 7 you. People visited the festival last year.